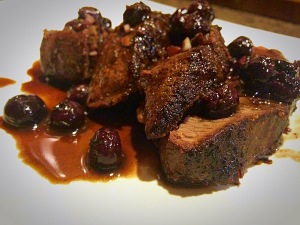 If your freezer looks like mine, you’ve got deer meat and frozen blueberries piled up!  Game meat like deer, elk, bear, etc. all has a flavor that works really well with fruit, especially berries.  You could make this recipe without the blueberries very easily and it would still taste amazing!  I just thought we could turn it up a notch for those with a hunting hubby around Valentine’s Day!

I wanted to take a moment to mention why game meat might be a really good addition to your diet.  Reason number one, it was wild and foraged for food in an “almost” natural habitat.  For the most part that means it eats what it is supposed to as opposed to a human forcing it to eat things that make it sick.  For deer, that means they eat lots of leaves…probably some of our corn fields too…and run around all day!  Happy and healthy.  Their meat is friendly (no one wants them hit by cars!), lean because of all the activity, and much higher in omega 3 fatty acids than any farm raised animal.  It is often cheaper too because someone hunted it and butchered it without there being a farm or a middleman grocer.

The backstrap is essentially the part that runs down the back that if we cut it into pieces, we would be cutting it into filets.  So, this meat is lean, likes a high heat sear, and should be served medium rare.

Dry the meat off and cover it generously with salt, pepper, and dried porcini mushrooms that you ground up.  You could leave out the mushrooms but you better replace that flavor with something else!

Over high heat, in a cast iron skillet, place a few tablespoons of saturated fat in the pan (coconut oil, ghee, bacon grease, tallow, etc.) When the skillet sizzles when you flick water at it, sear the meat on all sides for 2 minutes each or until it has a nice crust on it.

Once seared, place in the oven for about 20 minutes.

Take the meat out and put it aside to rest under a tin foil tent. This will ensure the juices go back into the meat.

Throw 2 cloves of garlic minced into the pan over medium high heat along with a couple tsp of dried thyme.  Saute for about 30 seconds and then pour a couple splashes of balsamic vinegar in the pan.  Then pour about 1/2 cup of chicken stock into the pan and stir around until all the brown bits are off the bottom.  Throw in a few handfuls of blueberries and let simmer and reduce for about 8-10 minutes.  It will get a thicker, more concentrated flavor.  When the time is almost up, pour any juices left under the meat into the pan.  Take the pan off the heat, and melt 2 Tbsp of butter to get a nice, rounded, silky sauce.  Serve!